Commonwealth Electric made sure the Boys of Summer were ready to play at Werner Ballpark, and completed a very fast track project on time.

The new Sarpy County Ballpark is located at HWY 370 and 126th Street in Papillion.  The ballpark is the new home for the Omaha Storm Chasers (formerly the Omaha Royals).  With 6,434 fixed seats the ballpark can accommodate a maximum of 9,023 people for baseball games and other events.  The ballpark consists of sixteen separate buildings including concession stands, restrooms, administration, ticketing, team store, press box, suites, locker rooms, etc.  Some other attractions feature a wiffle ball field, small basketball court, scorebard bar, tented areas for picnics, a carousel and an area for featured fireworks.

The ballpark had a tight schedule of one year from March 2010 to March 2011.  Commonwealth finished the contract work before the deadline.  General Contractor partners were Weitz Company.  Jake Gable, Project Manager; and Matt Burnham our General Foreman provided leadership for 22 electricians on the project.

The project involved over 16 miles of conduit installed in duct bank in and around the site.  Also, the setting for 4- 110′ lighting poles and 4-85′ poles and over 1,200 lighting fixtures; 40 miles of data cabling and 94 miles of electrical wire. 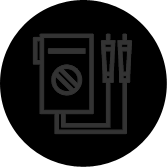